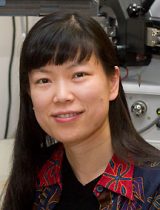 Link to School of Pharmacy

Link to Department of Chemistry

Research in my laboratory focuses on developing and implementing an array of novel mass spectrometry based strategies to answer questions about the most complex and elusive set of signaling molecules, the neuropeptides, and gain new insights into the roles of peptide hormones and neurotransmitters play in the plasticity of neural circuits and behavior. While significant effort has been directed to analytical technique and method development, it is the biomedical importance of understanding the neuropeptidergic system that drives our research to continuously refine and improve the analytical capabilities to address challenging neuroscience problems. A large body of research strongly suggests that an imbalance of chemical messengers is associated with various neurological disorders. However, compared to classical neurotransmitters such as amines, the functional roles of many neuropeptides are still poorly understood. This is, in part, due to the lack of analytical capabilities to measure and identify these low abundance endogenous signaling molecules in a complex microenvironment. Clearly, development of highly sensitive and selective analytical tools for neuropeptide identification and quantitation is in great demand. Specifically, we are interested in understanding the roles that neuropeptides play in food intake, neural network development and response to environmental stresses.

We have chosen to work with a simpler and well-defined crustacean nervous system to both facilitate technology development and address fundamental neuroscience problems related to neuromodulation and network plasticity. We are developing a multi-faceted mass spectrometry-based analytical platform to probe peptidergic signaling with enhanced sensitivity and selectivity. By combining chemical labeling, micro-scale separation (capillary electrophoresis and nanoLC), and tandem mass spectrometry sequencing techniques, we have discovered a large number of novel neuropeptides in crustacean nervous systems. The physiological effects of these new peptides at the cellular and network levels are evaluated in collaboration with neurophysiologists (Eve Marder and Michael Nusbaum) in the field. Furthermore, both mass spectrometric imaging technology and in vivo microdialysis sampling tools have been implemented to follow neuropeptide distribution and secretion with unprecedented details. Finally, a differential display strategy in conjunction with isotopic labeling technique is being developed to allow functional discovery of neuropeptides in response to various physiological changes.

While the technology is developed using crustacean model system as a test-bed, the technology advancement resulting from our research is widely applicable to the large-scale analysis of peptides and proteins in many biological systems, including those of mammalian and humans. Towards this end, we have established several exciting collaborations targeted at neurochemical analysis in more complex systems. These collaborative projects include biomarker discovery in neurodegenerative diseases (with Albee Messing and Judd Aiken), peptide analysis and neuromodulation in mammalian rhythmic neural network (with Jan Marino (Nino) Ramirez), proteomic analysis neuroprotective factors secreted by astrocytes (with Jeffrey Johnson), and proteomic study of dioxin-induced cardiotoxicity in developing zebrafish (with Warren Heideman and Richard Peterson). 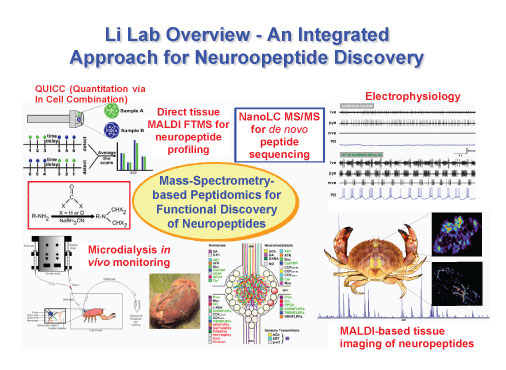